You are here: Home1 / Damon Lindelof 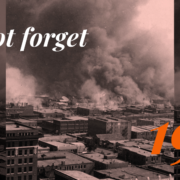 Please join the Department of African American Studies at UCLA as it commemorates the Tulsa Massacre Centennial beginning TODAY throughout the Memorial Day weekend.  To learn more, click HERE to visit a special edition of their website.

On the 100th anniversary of the 1921 Tulsa Race Massacre, this series, co-presented by the UCLA Department of African American Studies and the UCLA Hammer Museum, unpacks the history and legacy of an under-examined chapter of racial violence in the United States. These five online panels will cover the history of the massacre and its on-screen representations, as well other instances of domestic terrorism against communities of color in the United States, the renewed urgency and viability of reparations, and the economic empowerment of Black Americans.

Professor Brenda E. Stevenson moderates an online conversation with Karlos K. Hill and Hannibal Johnson, both authors and experts on the 1921 Tulsa Race Massacre, in which a white mob assaulted residents, looted, and destroyed their homes, churches, schools, and businesses in the predominantly Black neighborhood and business district of Greenwood in Tulsa, Oklahoma. The panel discusses the history of Black migration to Oklahoma, the Jim Crow realities of the early 20th century, the facts surrounding the Tulsa massacre, and the immediate aftermath in which hundreds of Black Americans were dead, homeless, or imprisoned, their families and financial lives devastated.

An Associate Professor and Chair of the Clara Luper Department of African and African-American Studies at the University of Oklahoma, Hill is the founder and chair of the 1921 Tulsa Race Massacre Commission. His most recent book is The 1921 Tulsa Race Massacre: A Photographic History. An attorney, author, and highly regarded public historian, Johnson is the author of Black Wall Street 100: An American City Grapples with its Historical Racial Trauma.

In this online program, professor Brenda E. Stevenson joins writer and producer Damon Lindelof, creator of HBO’s Watchmen series, and Watchmen writer Cord Jefferson to discuss how they crafted the series’ remarkable representation of the Tulsa Race Massacre. The series explores the generational trauma of the massacre within the context of an alternative U.S. history. Lindelof and Jefferson discuss why they centered Watchmen on this largely ignored event in American history, as well as how and why popular culture can continue to confront history, racism, and structural violence.